Early last year, my husband walked into a local bike shop in search of a new bike for our son. Having given up his training wheels the previous month, and having outgrown his 20” Specialized Hot Rock, Jackson needed a new bike. Greg found a suitable bike and called me to bring Jackson over for sizing and to purchase it, if appropriate. I arrived at the store within ten minutes, looked at the bike and agreed it was the bike for Jackson. I told the salesman to ring it up, only to be asked to come back the following day, as the store would be closing soon. All the while, the store’s owner looked glaringly on with nary an acknowledgement, with arms crossed, not 15 feet away.

Irritated by an utter lack of consideration and the absence of customer service, Greg and I went to another local bike shop the following morning. We found not only a bike for Jackson, but also bikes for ourselves, too. That was February 24, 2015, and our lives haven’t been the same since.

Our family has experienced so much excitement, adventure and achievement throughout the past year. We quickly became bored with pedaling around sedate trails, and graduated to single track mountain biking. Of course, with this transition came new bikes—actually several new bikes, as our individual skill levels increased.   Biking has taken the place of dinners out, weekend getaways, daytrips, shopping trips, manicures/pedicures and everything in between. Dare I say, as a trade off, our quality of overall life has increased exponentially? There is much to be said for a family sharing an interest. This past weekend, my husband and I took first place in a local co-ed, two-person endurance challenge—a feat that required incredible teamwork. Four days later and we’re still reveling in our combined accomplishment and talking about what it took to pull off this victory—not from the standpoint of gloating, but from the perspective of unified teamwork and jobs well done. 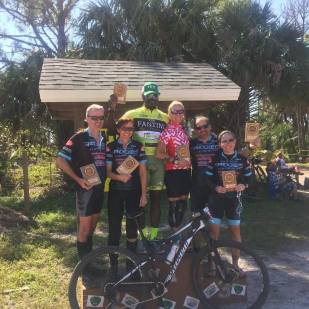 Much like my  skateboarding adventures a few years ago, biking tests my mettle and pushes me beyond my comfort zone and oftentimes, physical limits.   And also like skateboarding, when I’m on the bike I’m not thinking about anything else. I’m purely and unequivocally living in the moment.   With the myriad distractions life has to offer, there’s beauty and peace in this experience. 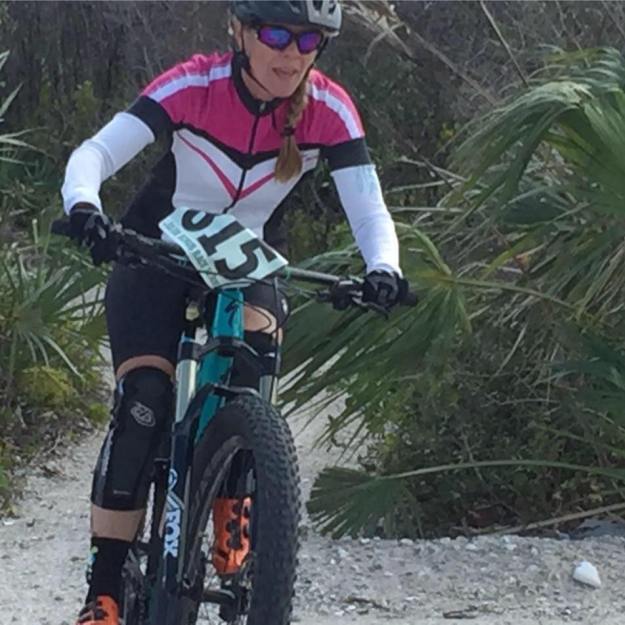 Perhaps the greatest by-product of this passion is the people we’ve met and friends we’ve made. To say we’ve met the nicest people isn’t hyperbole; it’s fact. I don’t know if I should attribute it to like-minded folks sharing a passion, or if we’re just a bunch of folks hopped up on fresh air and endorphins. Whatever the case, the folks we meet are genuine, happy, encouraging and uplifting people. They tend to be salt of the earth ladies and gents—some with small(er) children like us—who are eager to take a lap with you, talk bikes and components, and share stories of epic rides and trips, and dreams for said bikes, components, rides and trips.

Oh, and the bike store experience I very purposefully opened with? I’m a firm believer that everything happens for a reason. Early on, we were experiencing continued mechanical difficulties with a bike. A Google search directed us to a bike store in West Palm—Bike America. After speaking to a gentleman by the name of “Mike Jenison,” we decided to pay them a visit. Not only did Mike steer us in the right direction, his customer service was outstanding.   And, I don’t know if it was Mike’s charming personality, stellar customer service or what, but our first bicycle upgrades happened soon thereafter. Mike and his entire crew—Drew, Bolivar and Tom—have become not only our trusted equipment advisors, but friends and cheerleaders as well. If we hadn’t been turned away from the first store we visited, we wouldn’t have had the need to seek out another shop.   You know the saying—you don’t know how good an experience actually is unless you’ve had a comparably bad experience by which to make a comparison. And I’m sorry, but I can’t not mention Julie Roberts’ character’s famous Pretty Woman quote: “Big mistake. Big. Huge.” Yeah. Indeed it was.

When I say the past year has been quite a ride, I mean it in every literal sense of the word.

“Let me tell you what I think of bicycling. I think it has done more to emancipate women than anything else in the world. It gives women a feeling of freedom and self-reliance. I stand and rejoice every time I see a woman ride by on a wheel…the picture of free, untrammeled womanhood.” ~ Susan B. Anthony